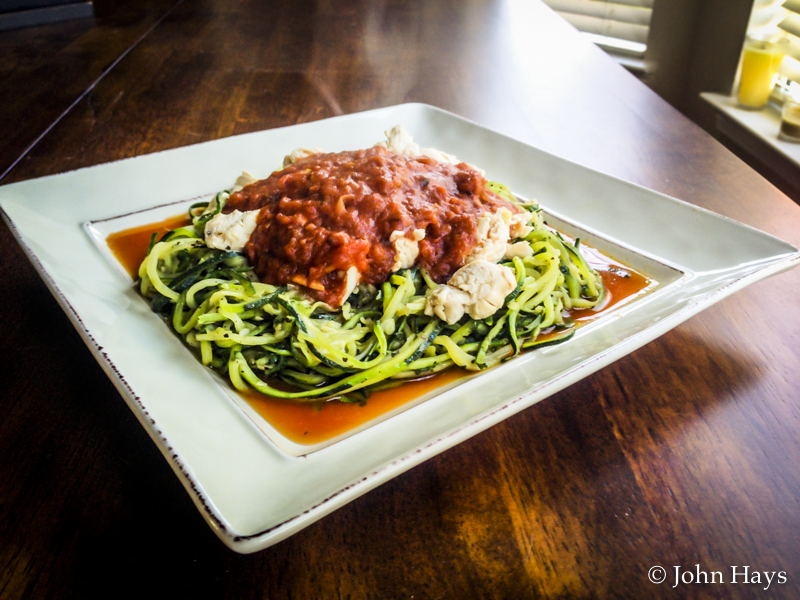 Spaghetti is my favorite meal, no question.  I love pasta and I love tomato sauce…just the whole experience makes me a happy man!

A couple of years ago I bought this contraption called a spiralizer with the promise of turning vegetables, not my favorite things, into spaghetti – my favorite thing!  That’s an easy YES, right?  Problem is, it sat on my shelf all this time. 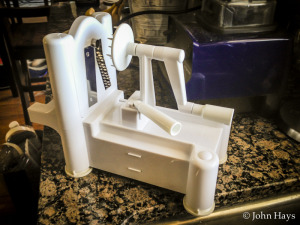 Well, no longer!  I gave it a whirl today, and check out what I made!  It was easy, took about 30 minutes total, and so delicious!

I started by turning the zucchini into pasta using the spiralizer.  That was the most fun part!

Next I sautéed the low carb zucchini pasta with some olive oil and a few herbs & spices. 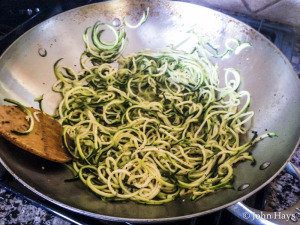 I then sautéed some chicken breast and I heated up some Engine 2 pasta sauce since I didn’t feel like making pasta sauce from scratch today.  It’s extremely healthy sauce with no sugar added at all!

I put it all together, and there you have it! Super simple, totally indulgent, and totally healthy! Yay! 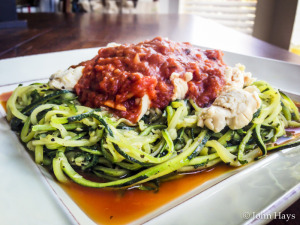 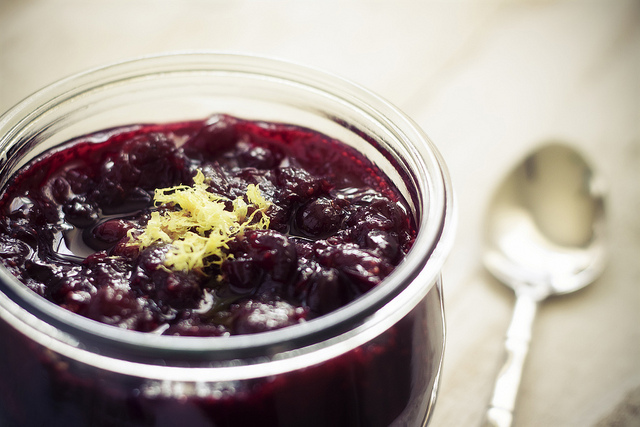 Want to enjoy the holidays and your indulgences, but leave the guilt at home?  Last year around the holidays I was doing a special cleanse and had a very limited nutrition plan, and cranberries were the only fruit I could eat, ironically.  So I found this awesome sugar free healthy cranberry sauce recipe on recipes.steviva.com and it tasted awesome!  I thought I had posted it last year but apparently not, so here it is now for you to enjoy for the holidays! 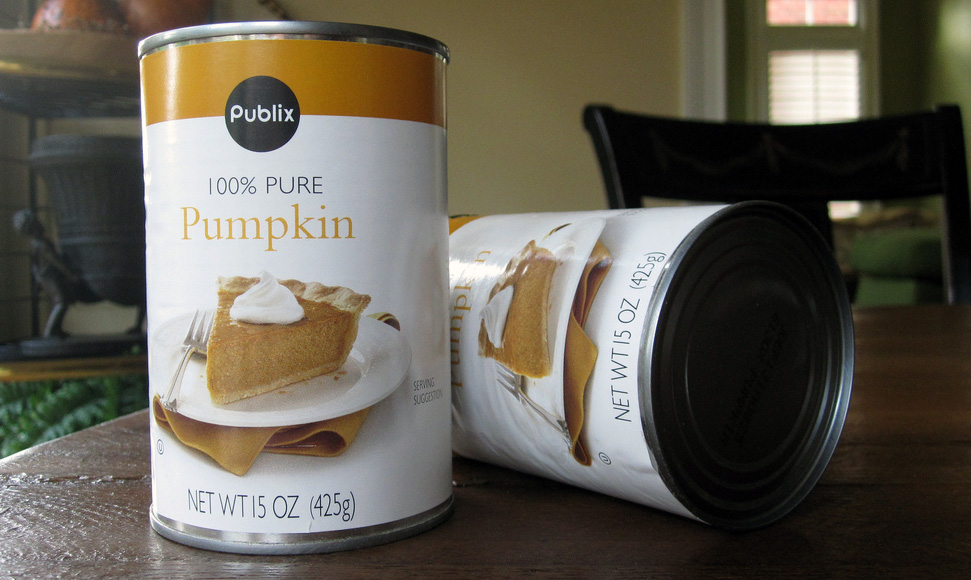 It never ceases to confound me. What would normally be considered health conscious, nutrition minded people who would never touch canned veggies any other time….suddenly the holidays roll around and they are making all their recipes with canned pumpkin…and saying “here’s a healthy nutritious recipe!”

Wait….didn’t you miss something? You’re using a canned veggie! Besides sulfites, sodium, etc…you can easily google and find all the issues with eating canned food. It’s just getting to be common sense these days, especially with vegetables, to go fresh or frozen. Plus, with pumpkin, it’s SO EASY to create the same thing using fresh pumpkin, and it tastes SO much better!

Years ago my mom finally made the switch, and it made SUCH a difference in her pumpkin pies! I’ll never go back, and I’ve become a one man fresh pumpkin advocate each fall and winter! Want to see how easy it is? Here ya go:

Just Say No to Canned Pumpkin! 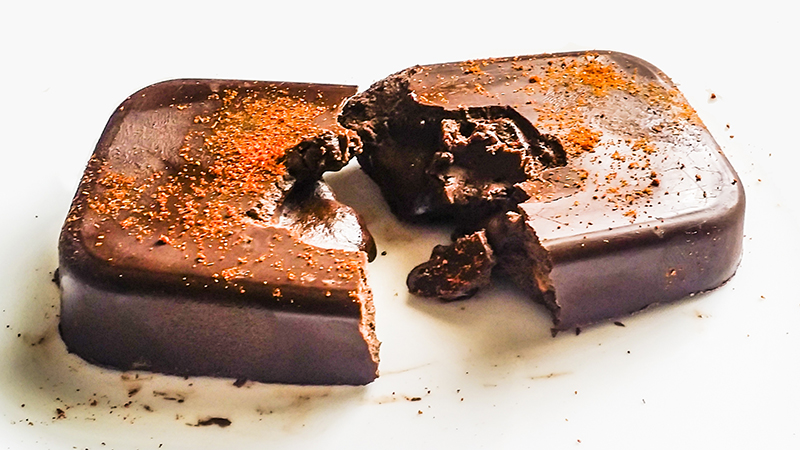 What would YOU do for a completely healthy, yet incredibly tasty chocolate bar? That’s JUST what I have for you today with this amazing recipe! This will CRUSH your cravings, you’ll never have to stop by the grocery store to pick up that little chocolate bar that sets you on the sugar roller coaster ever again! Plus, you’ll never get bored with it because you can do almost any variation on a chocolate bar and still remain healthy!

Sometimes simplicity is all that’s needed for a delicious meal! This is definitely a KISS recipe. Easy to make, easy to duplicate, and super tasty and healthy! Enjoy!

This recipe comes from our good friend Melissa Costello at KarmaChow.com!  Head over to Karma Chow and get the Karma Chow cookbook for tons of amazing healthy tasty vegan recipes!  Ever since doing the Ultimate Reset, I’ve discovered that I LOVE kale!  It’s hearty, you can sauté it, you can make chips out of it, add all kinds of flavor to it…it’s versatile and tasty!  As you already know, I’m a HUGE onion fan, especially caramelized onions, so this sounds like an incredibly tasty treat! 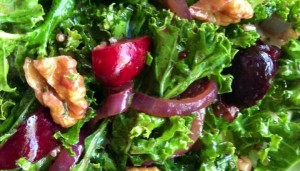 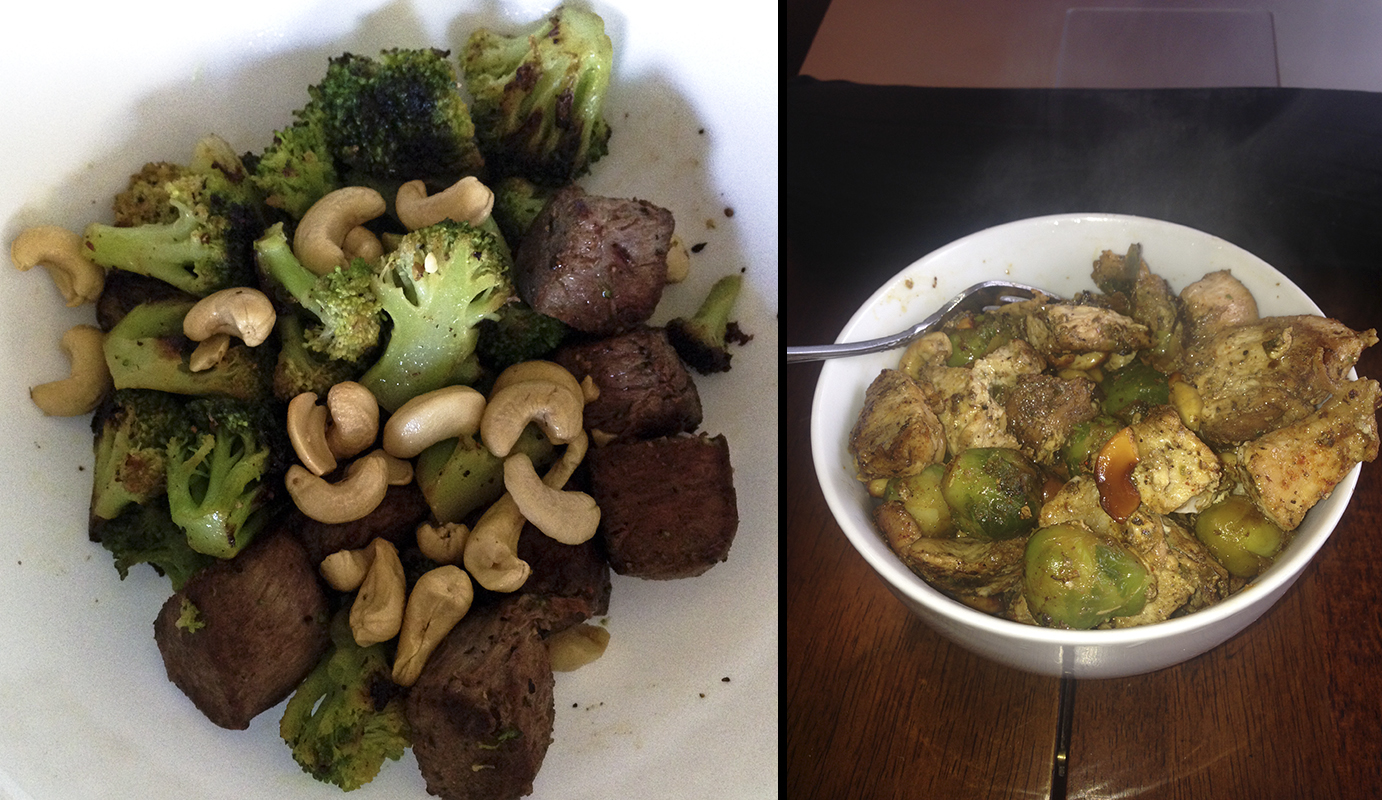 Stir Fry Bowls.  Delicious, health, easy ways to get your 5-6 healthy meals in each day and not take up too much time or effort!

I have recently begun a new very restricted meal plan that comes from working with clinical nutritionist and Body Beast trainer Sagi Kalev.  Together through various test, blood, saliva, etc…we have discovered some interesting things my body is dealing with at the moment, and thus some foods I need to be avoiding as well as some specialized supplements I should be taking.  It’s all temporary, just to detox my body and heal it so I can get back to eating my regular clean meal plan and doing my regular workouts again.

As is the purpose of FitDudeFood.com, when faced with a limited food list, I do what I do best…I get creative.  In this case, I came up with the idea of stir fry bowls.  I’m doing a very low carb plan, so I am upping my healthy fats a bit, thus allowing cashews into most of my meals (yay!).  The two meals you see above are variations on the same recipe, which I will give you now.

Since my nutrition plan is limited, I do this for 3 of my 5 daily meals every single day, switching from lamb to chicken breast to chicken thigh and swapping out the vegetable.  SUPER tasty, super simple, super healthy!  Try it yourself and let me know what you think! 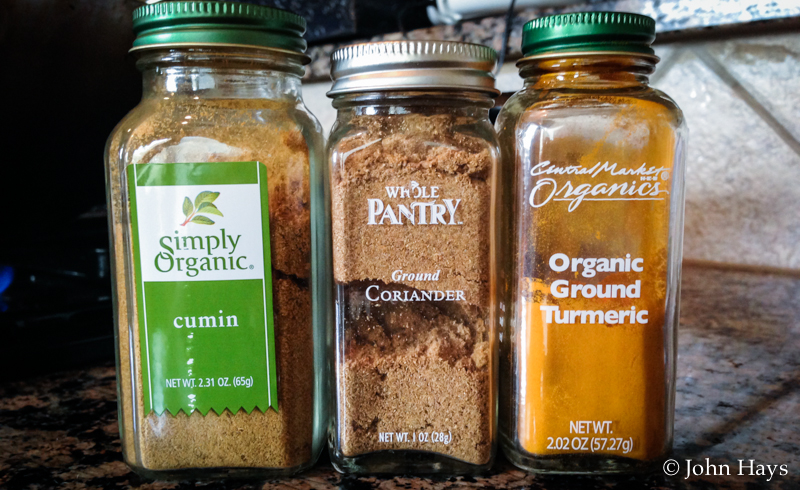 Add some spice to your life. These three spices are super tasty and super healthy, and go well together!

Cumin is an ancient herb that dates back all the way to the second millennium BC.  It’s even mentioned in the Bible.  The ancient Greeks kept cumin at the table like pepper; the Moroccans still do.  It’s used commonly in Brazil, and is added to provide an earthy warmy feeling to food and is often used in chili.  It is used for enhancing appetite, taste perception, digestion, vision, strength and helps with issues such as fever, loss of appetite, diarrhea, vomiting,  abdominal distension, edema and puerperal disorders.

The leaves of the coriander plant are known as cilantro and are used as a garnish and flavoring in many dishes.  The seeds are where the coriander spice comes from, and they provide significant amounts of  calcium, iron, magnesium, and manganese and contains strong antioxidants.  It’s used in flavoring meats and brewing Belgian beers.

Turmeric is part of the ginger family.  It’s commonly used to color mustard and used in curries.  While there are some Indian sweet dishes that use turmeric, it is generally used for its savory properties.  It’s used in canned beverages and baked products, dairy products, ice cream, yogurt, yellow cakes, orange juice, biscuits, popcorn color, sweets, cake icings, cereals, sauces, gelatins, etc.  In India turmeric has been used to treat stomach and liver ailments as well as skin conditions.  Turmeric is being investigated in relation to Alzheimer’s disease, arthritis, diabetes, and other clinical disorders.

So as you can see, not only do these spices add flavor to your dishes, they add health to your life! Try them on your next meal and let me know how you like them! 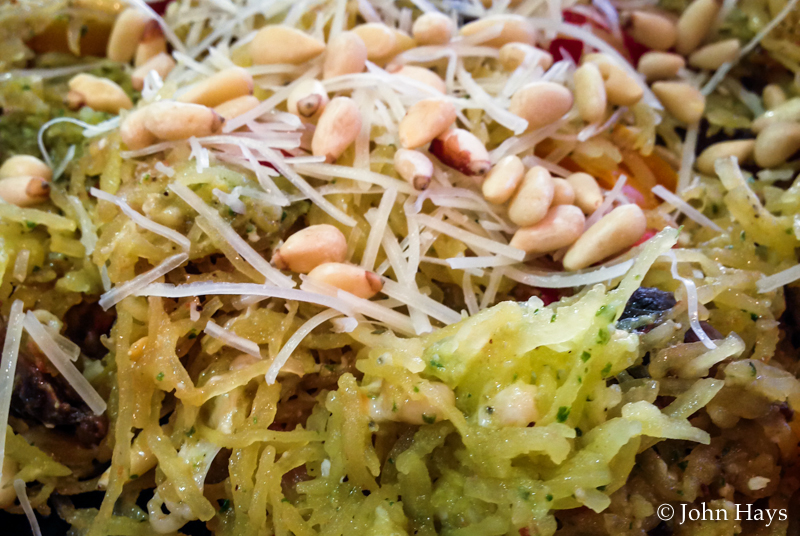 Spaghetti squash.  It’s the one you always heard about and wondered why it was called that.  Growing up, I didn’t like any squashes.  My mom overcooked them, they were slimy and gross.  Years later when I did the Ultimate Reset, I learned the art of appreciating the greatness of vegetables as they are, and cooking them simply and delicately to retain their natural textures and flavors.

When a friend introduced me to this spaghetti squash recipe, I kicked myself for never trying it before, since spaghetti is my absolute favorite meal.  Plus, I had never really tried pesto, so that was a welcome addition as well.  I hope you enjoy this recipe as much as I do, and share it with your friends who love pasta. 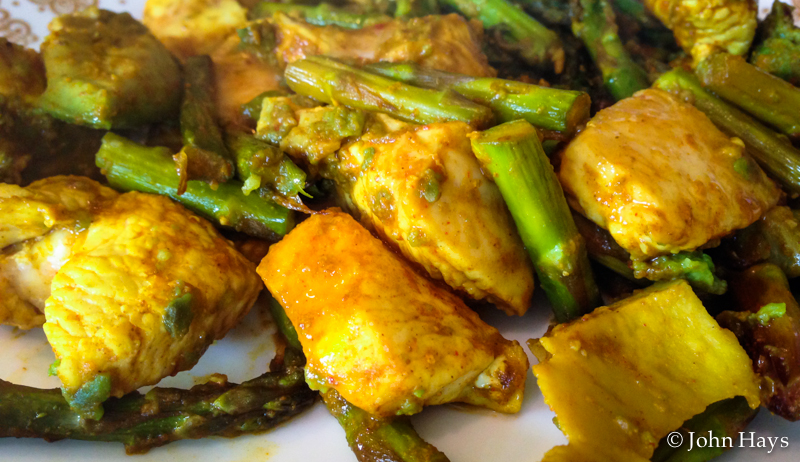 Fast & easy healthy tasty lunch.  Sounds to good to be true, right?  It’s really not that difficult.  It fascinates me to look at social media posts, especially on Twitter, and see SO many people complaining about “healthy eating is so hard” or “I just don’t have time to eat healthy” or “junk food tastes so much better”!

When you put forth the smallest amount of effort, you can easily make incredibly tasty dishes in a short amount of time that are very healthy!  For instance, this is my lunch during the week, it’s simple, it’s affordable and it’s incredibly tasty AND healthy!  I recommend you give this a shot and see how easy it is to eat healthy and love it!