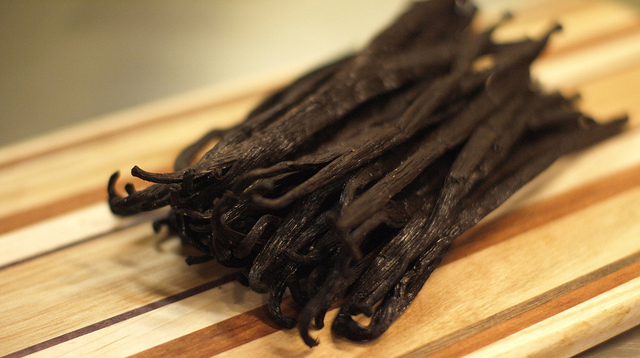 Vanilla.  God bless Hernan Cortes.  That’s the Spanish conquistador who introduced vanilla AND chocolate to Europe in the 1520’s.  Can you imagine?  A world without vanilla or chocolate?  Oh, and God bless Edmond Albius, the little 12 year old slave boy who discovered that the plant could be hand-pollinated, allowing for the globalization of vanilla.

There are three main types of vanilla, with Bourbon (no relation to the whiskey) vanilla being the most popular and grown in Madagascar in the Indian Ocean.  This vanilla is the second most EXPENSIVE spice, second only to saffron, because the process is so labor intensive to grow it.  Vanilla is used in baking, perfumes and even aromatherapy.

According to ancient Totonac myth (a small Mexican tribe), the first vanilla plant grew from the blood of two beheaded lovers!  Think about that the next time you’re enjoying some vanilla ice cream with your loved one!

An estimated 95% of “vanilla” products are actually flavored with vanillin, which is derived from lignin, NOT the vanilla fruit!

Be careful when purchasing vanilla extract in Mexico, it is often flavored using the tonka bean, which contains courmarin, something shown to cause liver damage and banned in the U.S.

In the United States, castoreum, the exudate from the castor sacs of mature beavers, has been approved by the  FDA as a food additive, often referenced simply as a “natural flavoring” in the product’s list of ingredients.  It is commonly used in both food and beverages, especially as vanilla and raspberry flavoring.

Natural vanilla extract contains small amounts of B-complex groups of vitamins such as niacin, pantothenic acid, thiamin, riboflavin and vitamin B-6. These vitamins help in enzyme synthesis, nervous system function and regulating body metabolism.  This spice also contains small traces of minerals such as calcium, magnesium, potassium, manganese, iron and zinc. Potassium is an important component of cell and body fluids that helps control heart rate and blood pressure. Manganese and copper are used by the body as co-factors for the antioxidant enzyme, superoxide dismutase. Iron is essential for red blood cell production and as a co-factor for cytochrome-oxidases enzymes.

While vanilla is a great tasting flavoring on its own, it is also quite effective at enhancing other flavors its blended with, so mixing it with chocolate enhances the chocolate flavor, and the same is true for many other flavors, which is why vanilla is such a popular base flavor.

Two years ago when Beachbody started talking about the chances of a vanilla Shakeology being created, people went nuts because, as stated above, vanilla is such a popular base flavor that can mix with anything and the demand has always been high for a healthy vanilla shake.  However, just as stated above, Beachbody recognized that 95% of the vanilla on the market is artificially flavored, so that was out due to the high health standard Beachbody has for Shakeology, and they also saw that using the pure Madagascar vanilla would be so expensive that it would drive the cost of Shakeology up, and they didn’t want that, so they were stuck with NO vanilla flavor.

So now, for the first time ever, Vanilla Shakeology, a HEALTHY PURE Vanilla Shakeology, is finally available.  I’ve tried it, it tastes amazing, the recipe ideas are endless since vanilla is so versatile, and this will easily be the most popular flavor by far as more people try it.

If you would like to get started with the new Vanilla Shakeology, Go Here!